The teacher’s union in Capistrano Unified School District is CUEA.  CUEA is affiliated with the California Teachers Association, the most powerful labor group in the state.  CUEA has seized upon a statement made by me in the press to rally their members and divert attention from their failed effort to keep our high schools closed until January.

Our teachers are working hard for the past six weeks to support the online programs of CUSD. Individual teachers struggle with the same personal issues that the Pandemic has brought upon everyone, and they deserve our thanks for their effort to adapt to a new way of teaching and working.  Unfortunately, among our teachers, there a few who seek to keep our campuses closed to students.  This group received the support of CUEA union leadership. Together, they almost succeeded this week, until their selfish scheme was discovered and stopped by a majority of the school board.

The scheme was revealed when, on Saturday, September 19, CUEA leadership included the following in their newsletter to members:

At this time many of you have seen the agenda for this Wednesday's upcoming board meeting, indicating the return for in person may be delayed for high school. Please know that this agenda item is a direct result of the hard work your CUEA Bargaining Team has put in over the past several months. CUEA has consistently pushed back against the District's plans to reopen. 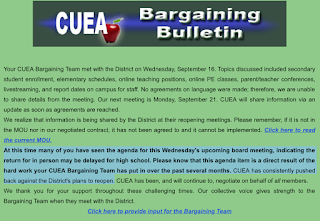 Angered by its self-inflicted loss of face, CUEA has launched an attack, claiming I have no respect for teachers and no business being on the school board, citing a statement I made to the press.  For anyone with the continuing patience to follow this story, please read on.

Here is my statement, cut-and-pasted directly from the Voice of OC.  Based on my recollection of the phone interview, it is accurate.  However, there is no context without the reporter’s question, which is not in the article.

“I hear teachers say we weren’t consulted, but that’s because they weren’t paying attention. I have very little sympathy for people who cry out at the last minute and that’s what’s going on here. They’re suddenly realizing that they’re actually going to have to go back to work after enjoying a very nice time being paid while at home since March.”

The reporter’s question was, “If all that you say is true, why are some teachers complaining that they were not consulted on the plans to re-open? Up to that point, the interview consisted of me bragging to the reporter of our teachers and their amazing commitment to their work in this difficult situation. I also talked about the quality of our re-opening plan compared to those of surrounding districts and all the work that went into the plan, including our Memorandum of Understanding (MOU) with the union. All of this was omitted from the article along with the reporter's questions.

In my statement, I referred to the group of teachers still running a deceitful campaign to keep CUSD high schools closed.  The tactics of this group are unprofessional and insubordinate in light of the MOU.  Moreover, they are dishonest and selfish in representing their opinion to others.  Their specious claim that they were not consulted on our re-opening plans was the subject of the reporter’s question.

But they were consulted. The school district and the union have spent hundreds of hours together planning and negotiating, resulting in two detailed MOUs, and the final draft of a third.  These agreements lay out how we will re-open the schools.  We are proud of this work, though it has been difficult and slow to accomplish. We worked through numerous complex issues with the union at great expense and loss of time.  However, when it was done, I personally thanked the union President Joy Schnapper for her union's commitments.  The MOUs are good agreements for all parties involved.

You can only imagine the shock of some Trustees when the union's newsletter of September 19, circulated.  It is astounding and disappointing that the same union that signed the MOUs could be involved in undermining the re-opening.  Those MOUs represent a promise between the parties who signed, and the union side was cheating by their own admission.

Caught in this ruse, on September 20, the union leadership got slammed online in social media, and many parents were outraged.  Frankly, so were most Trustees.  The union’s Trojan Horse plan to keep schools closed was on the school board September 23 agenda for consideration as “Addendum #3”.  By Monday morning, the Trustee who, working perhaps a bit too close with the union, had urged board consideration of this item went on social media and disclaimed support for it. To the remainder of the board there was an obvious problem. By the following day, Addendum #3 was removed from the board agenda due to a lack of Trustee support.  That might have been the end of the matter, except for the retribution campaign from the union that followed. 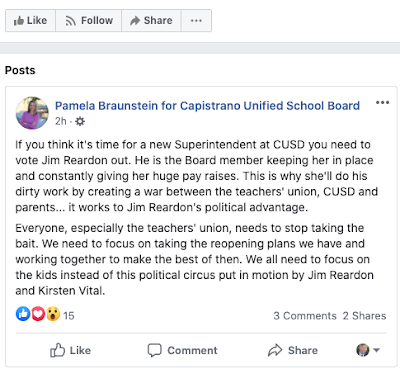 The first sign of trouble was when my opponent in the election called for the replacement of CUSD’s Superintendent.  As a candidate for the school board, and for one who professes a desire to work together for the betterment of schools (with no plan to do so), this is an extraordinary statement and wholly irresponsible in current circumstances. She then goes on to imply that the Superintendent and I were responsible for creating a war with the union. Obviously, she has no idea how a school district is governed.  Finally, she didn’t mention that her entire election campaign is endorsed and supported by CUEA, the union. Her statement about the union "not taking the bait" is too rich for words.

By Wednesday night, the union was in full retribution-mode at our school board meeting. An organized chorus of teachers feigned outrage over my comments to Voice of OC.  It's all in the recording of the meeting, for those who missed it. This was followed by dozens of emails, all from teachers, threatening phone calls from people who block their telephone numbers, and even more threatening calls from people claiming to be spouses of teachers.  The whole episode might be written-off as the comic relief of an election, what I often refer to as the "silly season." But on a serious note, CUSD begins a phased re-opening of elementary schools on Monday, and after that, each day there will be more and more students back in classrooms.  The path to this moment has been long and challenging and the union's behavior is disruptive.

For teachers who have read this far, I am a consistent advocate for fair pay and protection of take-home pay on the school board.  I believe I lead the board in the analysis of proposals during negotiations, and I understand the nature of negotiation.  A working teacher should understand that I respect the achievements of teachers as a group, and only seek to protect individual teachers financially during periods of uncertainty like the one we are experiencing now.

I am particularly proud of one financial protection I had a direct hand in creating. CUSD has set up a $1 million fund to protect the income of teachers who are restricted from working due to their health restrictions in this Pandemic.  We are the only school district in OC to have such a fund. The very idea of the fund originated with that horrible school board President who has been accused of "having blood on your hands", of "sacrificing teachers", of "risking children's lives", of "putting the community ahead of education," and of course, of being "anti-union" (which I'm not).  All these statements were made by dozens of teachers (perhaps even you) who think it okay to buy a school board.

For taxpayers and parents (some of whom are teachers), I will continue to advocate for fair taxation, protections for Mello-Roos taxpayers, and improvement of local schools.  I will continue to resist many of the harebrained ideas that come from Sacramento, and I am confident we can maintain the quality of CUSD schools if we all act responsibly.

On Monday, September 21, I arranged an online Zoom meeting with high school student leaders from across the school district to learn of their experiences with online classes.  Dissident teachers have since accused me of letting the students make decisions for the school district, or of taking a survey or vote in this meeting.  That is utterly false.  Instead, I listened to dozens of bright Juniors and Seniors testify about anxiety, depression, grade erosion, loss of athletic opportunity, lack of engagement, online fatigue, drug use, and fear for friends who some noted were struggling with home situations that are not conducive to life, much less education.  Despite the rancor among adults, this brought the problem into clear focus for me.  We need to get these students back in school without further delays.

My words to Voice of OC might have been more carefully crafted to avoid the contextual trap.  But at least, nobody has to wonder what I'm thinking.

Do you live in Trustee Area 2? Click here to find out.