This evening, I went to the Registrar of Voters' office on South Grand in Santa Ana to complete my filing for reelection in November. This is what you call a "low-key" announcement.  I'm running.

A visit to the ROV is a sobering experience. People from all over Orange County gather in the lobby, filing to run in the upcoming election. Some are obviously experienced. Most are scared, lost and struggling with the process. The experience is instructive as to what voters can expect of government, and what they must demand.  It's a slice of humanity.

The ROV staff show remarkable patience, helping the newcomers through old requirements, and helping those with experience deal with the new requirements. It's a small staff, but OC voters should be proud of the work they do. Our ballot is important, and ROV staff is the thin line that separates an election from chaos.

"So you pay your money and you take your chances."

Unless you are willing to literally camp-out in the ROV lobby (not allowed), you can have no clear idea of what is happening in your race until the filing period ends on August 12 (or 17th, if no incumbent has filed by the 12th). In a school board race where no nomination papers are necessary, anyone can walk in and and file to place their name on the ballot. If they want a ballot statement (200 words), they must pay a substantial fee. But anyone can place their name on the ballot for nothing -- if they can find their way to this nondescript lobby on South Grand Avenue.

At 5 PM, the lobby gets rather personal when the doors are locked. You meet interesting people, all who are waiting. Most are prospective candidates, though there are one or two handlers mixed in. The ROV staff assures you that you will be served, while excluding late-comers. They are well-organized and fair. They don't hurry. Advice is freely offered. Two hours after the office closed, my paperwork was complete.

Finally, the oath of office (right hand in the air):

With that, it was done and I became an official candidate.  This was also a moment to reflect on my past four years on the Capistrano Unified School District Board, and as co-founder of the Capistrano Taxpayers Association.  Did I live up to this oath in my public roles?  Did we?

I have had "mental reservations" throughout my life, but not about this.

Evaluation of my performance at Capistrano Unified is a matter best left to voters who will examine my record of the past four years.  At Capistrano Taxpayers Association, with the support of neighbors, volunteers defended Article XIIID (Proposition 218) of the California Constitution in court, where it was confirmed that municipal utility charges (e.g. water) must be cost-based and cannot be used to disguise taxes that have not been approved by voters. Too bad for San Juan Capistrano, but a big affirmation of constitutional government in California! In truth, all citizens are embraced by this oath, even if few hold public office. It is a matter of pride in country and faith in our future.

Tomorrow is the last normal day before the filing deadline for the November election.

Do you live in Trustee Area 2? Click here to find out.

For San Clemente without Talega 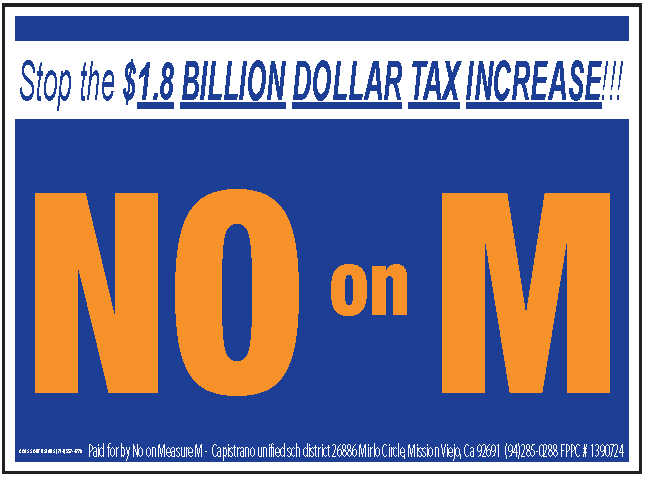